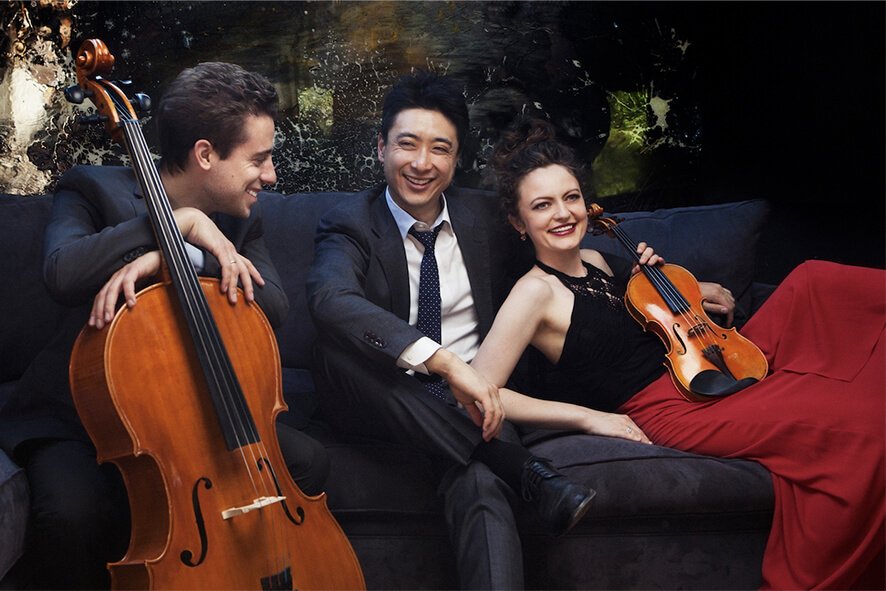 Hailed as “a first-class ensemble” (Orange County Register), “unfailingly stylish” (The Strad), “technically dazzling” (Long Beach Gazette), “flawless” (New York Concert Review) and “the epitome of what chamber musicians should be” (Palm Beach Daily News), Trio Céleste has firmly established itself as one of the most dynamic chamber music ensembles on the classical music scene today.

Winners of the prestigious Beverly Hills Auditions and the recipients of the 2017 Emerging Artist Award from Arts Orange County, the ensemble has performed hundreds of recitals worldwide also appearing in master classes, entrepreneurship seminars, and performance residencies at some of the nation’s top academic institutions and centers for arts and culture. In 2014, the ensemble was selected from over 500 applicants to be Artists-in-Residence at The Grand Canyon National Park.

Trio Céleste was Ensemble-in-Residence at the Claire Trevor School of the Arts at UC Irvine from 2013-2019, and are current Directors of the acclaimed arts organization Chamber Music | OC where they have been featured in collaborations with violist Paul Coletti, Emerson String Quartet violinist Philip Setzer, and principal players of the Orpheus Chamber Orchestra.

The ensemble was inspired to take its name after their very first meeting in New York City, where a rare celestial occurrence – the largest harvest moon in two decades – marked the beginning of their tenure together.

Hailed as “lively and sensational” by Montreal’s Arts and Opinion, and “flawless” by New York Concert Review, prize-winning violinist Iryna Krechkovsky enjoys an international career as soloist, chamber music collaborator, educator, and arts executive. Celebrated for her tone, emotionality, and precision, she has performed in concert venues from Zankel Hall at Carnegie Hall and Lincoln Center’s Alice Tully Hall in New York City, to The American Church in Paris, Chicago Cultural Center, the Los Angeles County Museum of Art, Roy Thomson Hall in Toronto, and Seoul Arts Center in Korea. She has appeared on Classical KUSC, KABC-TV Los Angeles, the Korean Broadcasting System, National Public Radio, the Public Broadcasting Service, and as a speaker/performer at TEDxChapmanU. She was also a top prize winner at the Sorantin International Competition, the Canadian Music Competition, the Kocian International Violin Competition, the Beverly Hills International Auditions, and the Canada Council for the Arts Instrument Bank Competition which afforded her a three-year loan of the 1689 “Baumgartner” Stradivari violin.

Krechkovsky has performed as soloist with the Lviv National Symphony Orchestra of Ukraine, the Toronto Sinfonietta, the Seoul National University Virtuosi, the California Chamber Orchestra, the Warren Philharmonic Orchestra, and the Canadian Academy Chamber Orchestra. She has collaborated with artists including Colin Carr, Paul Coletti, Robert deMaine, Glenn Dicterow, Karen Dreyfus, Eugene Drucker, David Finckel, Gil Kalish, Kyung Sun Lee, Robert McDonald, and Philip Setzer, and has performed hundreds of recitals throughout North America, Europe, and Asia with her husband, pianist Kevin Kwan Loucks, as part of the award-winning Krechkovsky/Loucks Duo. In 2012, the Duo formed Trio Céleste with cellist Ross Gasworth and served as Ensemble-in-Residence at the Claire Trevor School of the Arts at UC Irvine, where they also directed the annual Trio Céleste Summer Chamber Music Festival.

Born in Ukraine, Iryna Krechkovsky attended the Cleveland Institute of Music and holds a Doctor of Musical Arts degree from Stony Brook University in New York where she was recently awarded the distinguished 40 Under Forty Alumni Award. She is Co-Founder and Director of Education at Chamber Music | OC where she curates the nationally recognized Pre-College Program – a comprehensive mentoring program for exceptionally talented musicians throughout Southern California. Krechkovsky studied with David and Linda Cerone, Philip Setzer, Philippe Graffin, and Pamela Frank, and currently performs on a 2007 violin by Ryan Soltis and Samuel Zygmuntowicz.

Cellist Ross Gasworth has performed in iconic venues around the world, including Carnegie Hall, Tokyo’s Suntory Hall, The Ho Chi Minh Opera House, The Hollywood Bowl, The Sydney Opera House, The Seoul Arts Center, and Paris’ Radio France Concert Hall. Ross was selected by Michael Tilson-Thomas from to perform as Principal Cellist of the YouTube Symphony Orchestra in Sydney, Australia, and at Google’s Zeitgeist festival in London, England. He has toured internationally as a member of Trio Céleste, and serves as Director of Artistic Planning for Chamber Music | OC.

Ross began playing the cello at age three. He earned his Bachelor and Master of Music degrees from the Cleveland Institute of Music, where he studied with Richard Aaron and Stephen Geber. Other past teachers include Eugene Osadchy at the University of North Texas, and Michel Strauss at the Paris Conservatoire.

As a collaborative artist, Kevin Kwan Loucks has appeared in recitals with Rachel Barton Pine, Colin Carr, Paul Coletti, Robert deMaine, Glenn Dicterow, Karen Dreyfus, Eugene Drucker, Edgar Meyer, Johannes Moser, Kyung Sun Lee, and Carol Wincenc. He has been featured in collaborations with the Afiara, Argus, Arneis, Cecilia, Jupiter, Lyris, and Rus String Quartets, and has performed and recorded as a member of Gruppo Montebello, an all-star ensemble of acclaimed Banff Centre resident artists based in Canada. Loucks has performed hundreds of recitals throughout North America, Europe, and Asia with his wife, violinist Iryna Krechkovsky, as part of the award-winning Krechkovsky/Loucks Duo. In 2012, the Duo formed Trio Céleste with cellist Ross Gasworth and served as Ensemble-in-Residence at the Claire Trevor School of the Arts at UC Irvine where they also directed the annual Trio Céleste Summer Chamber Music Festival.

A Korean-American adoptee and graduate of The Juilliard School in New York City, Kevin Kwan Loucks was mentored by pianist Julian Martin. He is an alumnus of programs at the Aspen Music Festival and Music@Menlo, and holds a Doctor of Musical Arts degree from Stony Brook University where he served as Head of Piano for the Pre-College Division and Teaching Assistant for the Emerson String Quartet. He is Co-Founder of Chamber Music | OC, which earned him recognition from Orange County Business Journal and OC Weekly who named him one of Southern California’s most influential people. In addition to his artistic training, Loucks holds an Executive Master of Business Administration from the Argyros School of Business and Economics at Chapman University where he studied entrepreneurship, finance, management, and strategy, and completed his Executive Education at Stanford Graduate School of Business. He previously served as Director of Business Development and Strategic Partnerships at the Philharmonic Society of Orange County, and Director of Innovation and Program Development at the Music Academy of the West. He currently serves as CEO of Chamber Music America in New York City, dividing his time between New York and Orange County.