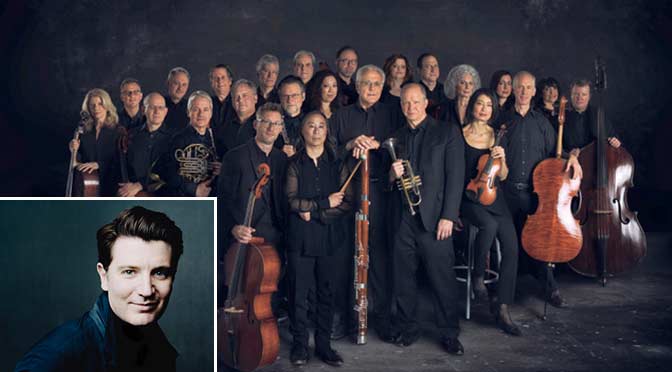 “Playing with perfect unanimity, their performances have polish and spirit, and display an infectious love for making music.”
— The New York Times 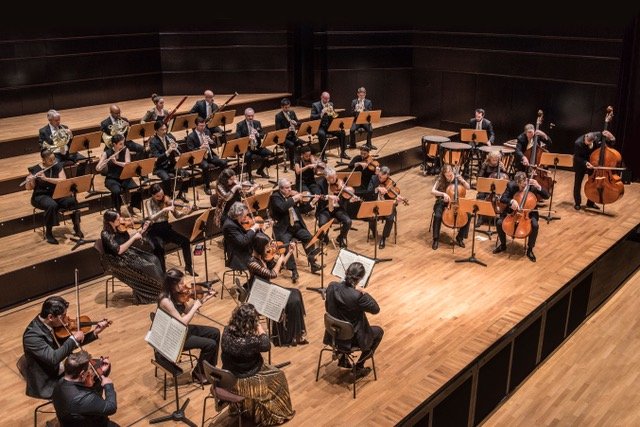 Orpheus Chamber Orchestra
Orpheus Chamber Orchestra is a radical experiment in musical democracy, proving for fifty years what happens when exceptional artists gather with total trust in each other and faith in the creative process. Orpheus began in 1972 when cellist Julian Fifer assembled a group of New York freelancers in their early twenties to play orchestral repertoire as if it were chamber music. In that age of co-ops and communes, the idealistic Orpheans snubbed the “corporate” path of symphony orchestras and learned how to play, plan and promote concerts as a true collective, with leadership roles rotating from the very first performance.

It’s one thing for the four players of a string quartet to lean in to the group sound and react spontaneously, but with 20 or 30 musicians together, the complexities and payoffs get magnified exponentially. Within its first decade, Orpheus made Carnegie Hall its home and became a global sensation through its tours Europe and Asia. Its catalog of recordings for Deutsche Grammophon, Nonesuch and other labels grew to include more that 70 albums that still stand as benchmarks of the chamber orchestra repertoire, including Haydn symphonies, Mozart concertos, and twentieth-century gems by Stravinsky, Schoenberg, Ravel and Bartók.

The sound of Orpheus is defined by its relationships, and guest artists have always been crucial partners in the process. Orpheus brings the best out of its collaborators, and those bonds deepen over time, as heard in the long arc of music-making with soloists such as Richard Goode and Branford Marsalis, and in the commitment to welcoming next-generation artists including Nobuyuki Tsujii and Tine Thing Helseth. Breaking down the barriers of classical repertoire, partnerships with Brad Mehldau, Wayne Shorter, Ravi Shankar and many others from the sphere of jazz and beyond have redefined what a chamber orchestra can do. Relationships with composers and dozens of commissions have been another crucial way that Orpheus stretches itself, including a role for Jessie Montgomery as the orchestra’s first ever Artistic Partner. Having proven the power of direct communication and open-mindedness within the ensemble, the only relationship Orpheus has never had any use for is one with a conductor.

At home in New York and in the many concert halls it visits in the U.S. and beyond, Orpheus begins its next fifty years with a renewed commitment to enriching and reflecting the surrounding community. It will continue its groundbreaking work with those living with Alzheimer’s Disease through Orpheus Reflections, and the Orpheus Academy as well as the Orpheus Leadership Institute spread the positive lessons of trust and democracy to young musicians and those in positions of power. Each year, Access Orpheus reaches nearly 2000 public school students in all five boroughs of New York City, bringing music into their communities and welcoming them to Carnegie Hall. Always evolving as artists and leaders, the Orpheus musicians carry their legacy forward, counting on their shared artistry and mutual respect to make music and effect change.

Alessio Bax
Combining exceptional lyricism and insight with consummate technique, Alessio Bax is without a doubt “among the most remarkable young pianists now before the public” (Gramophone). He catapulted to prominence with First Prize wins at both the Leeds and Hamamatsu International Piano Competitions, and is now a familiar face on five continents, not only as a recitalist and chamber musician, but also as a concerto soloist who has appeared with more than 150 orchestras, including the London, Royal, and St. Petersburg Philharmonic Orchestras, the New York, Boston, Dallas, Cincinnati, Seattle, Sydney, and City of Birmingham Symphony Orchestras, and the NHK Symphony in Japan, collaborating with such eminent conductors as Marin Alsop, Vladimir Ashkenazy, Sir Andrew Davis, Fabio Luisi, Sir Simon Rattle, Yuri Temirkanov, and Jaap van Zweden.

Bax constantly explores many facets of his career. He released his eleventh Signum Classics album, Italian Inspirations, whose program was also the vehicle for his solo recital debut at New York’s 92nd Street Y as well as on tour. He recently debuted with the New York Philharmonic Orchestra, playing Schumann Concerto and the Seattle Symphony with Saint-Saëns’ Second Piano Concerto and embarked on a trio tour of Spain with violinist Joshua Bell and cellist Steven Isserlis. Bax and his regular piano duo partner, Lucille Chung, gave recitals at New York’s Lincoln Center and were featured with the St. Louis Symphony and Stéphane Denève. He has also toured extensively with Joshua Bell and presented the complete works of Beethoven for cello and piano with cellist Paul Watkins in New York City.

Bax revisited Mozart’s K. 491 and K. 595 concertos, as heard on Alessio Bax Plays Mozart, for his recent debuts with the Boston and Melbourne Symphonies, both with Sir Andrew Davis, and with the Sydney Symphony, which he led himself from the keyboard. In addition, Bax made his solo recital debut at London’s Wigmore Hall, and give concerts at L.A.’s Disney Hall, Washington’s Kennedy Center, and New York’s Carnegie Hall.

Since 2017 he has been the Artistic Director of the Incontri in Terra di Siena Festival, a Summer Music Festival in the Val d’Orcia region of Tuscany. He appears regularly in festivals such as Seattle, Bravo Vail, Salon-de-Provence, Le Pont in Japan, Great Lakes, Verbier, Ravinia and Music@Menlo.

In 2009, he was awarded an Avery Fisher Career Grant, and four years later he received both the Andrew Wolf Chamber Music Award and the Lincoln Center Award for Emerging Artists.

At the record age of 14, Bax graduated with top honors from the conservatory of Bari, his hometown in Italy, and after further studies in Europe, he moved to the United States in 1994. A Steinway artist, he lives in New York City with pianist Lucille Chung and their daughter, Mila. He was invited to join the piano faculty of Boston’s New England Conservatory in the fall of 2019.