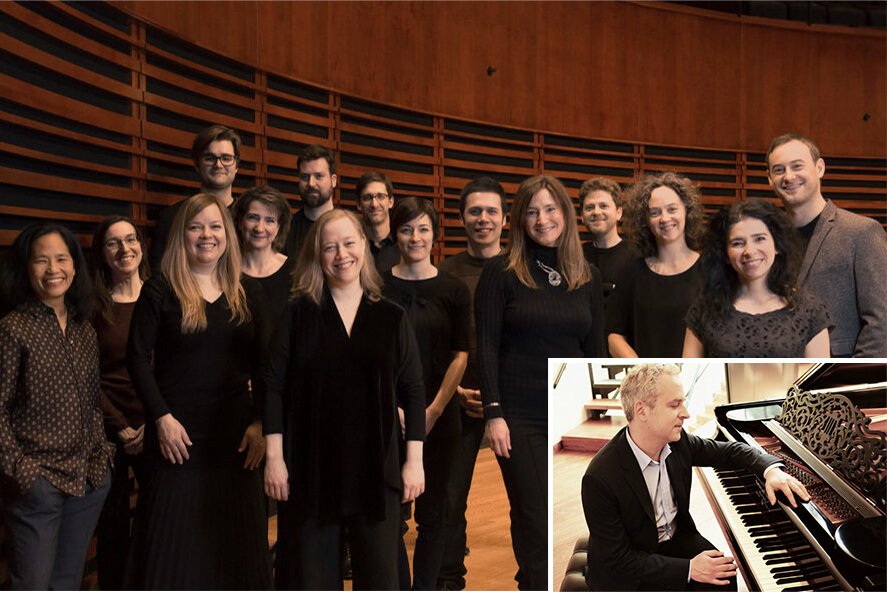 [Les Violons du Roy:] “The playing was sublime, the phrasing was both meticulously phrased and yet thrillingly free…”
— Seen and Heard International, Los Angeles

[Jeremy Denk:] “An artist you want to hear no matter what he performs.”
— The New York Times

Les Violons du Roy takes its name from the celebrated court orchestra of the French kings. It was founded in 1984 by Bernard Labadie, now styled founding conductor, and continues under music director Jonathan Cohen to explore the nearly boundless repertoire of music for chamber orchestra in performances matched as closely as possible to the period of each work’s composition. Its minimum fifteen-member complement plays modern instruments, albeit with period bows for Baroque and Classical music, and its interpretations are deeply informed by the latest research on seventeenth- and eighteenth-century performance practice. The repertoire of the nineteenth and twentieth centuries receives similar attention and figures regularly on the orchestra’s programs.

Les Violons du Roy has been a focal point of Québec City’s musical life since it was founded in 1984, and in 1997 it reached out to enrich the cultural landscape of Montréal as well. In 2007, the orchestra moved into its permanent home base in Québec City’s Palais Montcalm while continuing to build on the worldwide reputation it has acquired in countless concerts and recordings carried by medici.tv, Radio-Canada, CBC, and NPR along with regular appearances on the festival circuit.

Since Les Violons du Roy’s first trip to Washington, D.C., in 1995, its U.S. travels have been enriched with numerous and regular stops in New York, Chicago, and Los Angeles. Its ten appearances at Carnegie Hall include five with La Chapelle de Québec featuring the Messiah, the Christmas Oratorio, and the St. John Passion under Bernard Labadie, founder and music director of the choir, and another featuring Dido and Aeneas under Richard Egarr. Walt Disney Concert Hall in Los Angeles has hosted the orchestra three times, once with La Chapelle de Québec in the Messiah, again under Bernard Labadie. Les Violons du Roy is represented by Opus 3 Artists and Askonas Holt.

Jeremy Denk is one of America’s foremost pianists. Winner of a MacArthur “Genius” Fellowship, and the Avery Fisher Prize, Denk was recently elected to the American Academy of Arts and Sciences. Denk returns frequently to Carnegie Hall and in recent seasons has appeared with the Chicago Symphony, New York Philharmonic, Los Angeles Philharmonic, San Francisco Symphony, and Cleveland Orchestra, as well as on tour with Academy of St Martin in the Fields, and at the Royal Albert Hall as part of the BBC Proms.

In 19-20, until the COVID-19 pandemic led to the shutdown of all performances, Denk toured Bach’s Well-Tempered Klavier Book 1 extensively, and was to have performances culminate with Lincoln Center in New York and the Barbican in London. He returned to Carnegie Hall to perform Beethoven’s Choral Fantasy with Orchestra of St. Luke’s, and made his solo debut at the Royal Festival Hall with the London Philharmonic performing Beethoven’s Piano Concerto No. 4. He also made his solo recital debut at the Boulez Saal in Berlin performing works by Bach, Ligeti, Berg, and Schumann, and returned to the Piano aux Jacobins Festival in France, as well as London’s Wigmore Hall. Further performances abroad included his debut with the Bournemouth Symphony, his returns to the City of Birmingham Symphony and the Piano Espoo Festival in Finland, and recitals of the complete Ives Violin Sonatas with Stefan Jackiw.

Highlights of the previous season included a three-week recital tour, culminating in Denk’s return to Carnegie Hall; play-directing Mozart Concerti on an extensive tour with Academy of St Martin in the Fields; and a nationwide trio tour with Joshua Bell and Steven Isserlis. He also performed and curated a series of Mozart Violin Sonatas (‘Denk & Friends’) at Carnegie Hall.

Denk is also known for his original and insightful writing on music, which Alex Ross praises for its “arresting sensitivity and wit.” He wrote the libretto for a comic opera presented by Carnegie Hall, Cal Performances, and the Aspen Festival, and his writing has appeared in the New Yorker, theNew Republic, The Guardian, and on the front page of the New York Times Book Review. One of his New Yorker contributions, “Every Good Boy Does Fine,” forms the basis of a book for future publication by Random House in the US, and Macmillan in the UK.

Denk’s recording of the Goldberg Variations for Nonesuch Records reached No. 1 on the Billboard Classical Charts. His recording of Beethoven’s Piano Sonata No. 32 in C Minor, Op. 111 paired with Ligeti’s Études was named one of the best discs of the year by the New Yorker, NPR, and the Washington Post, and his account of the Beethoven sonata was selected by BBC Radio 3’s Building a Library as the best available version recorded on modern piano. Denk has a long-standing attachment to the music of American visionary Charles Ives, and his recording of Ives’s two piano sonatas also featured in many “best of the year” lists. His recording c.1300-c.2000 was released in 2018 with music ranging from Guillaume de Machaut, Gilles Binchois and Carlo Gesualdo, to Stockhausen, Ligeti and Glass.