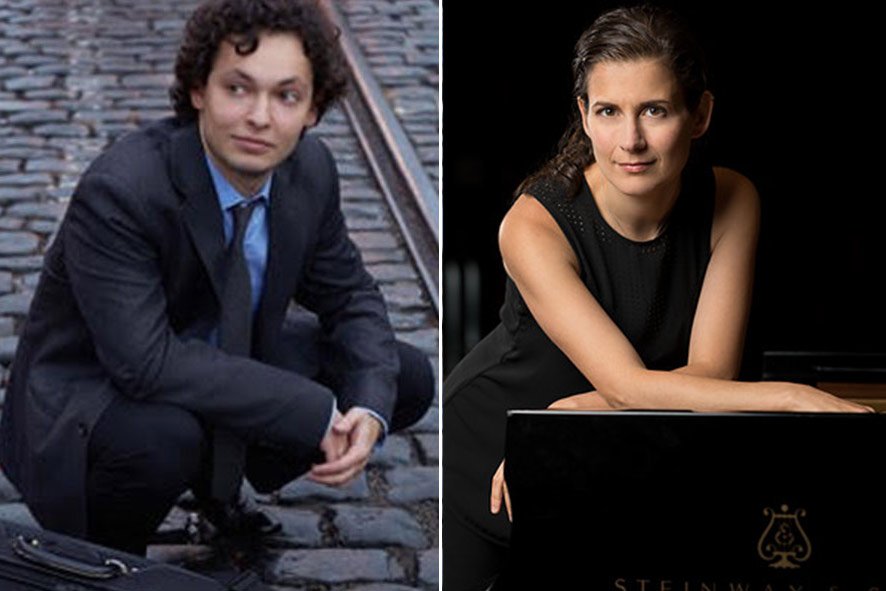 With a “dark-hued tone and razor-sharp technique” (The New York Times), Russian-American violinist Yevgeny Kutik has captivated audiences worldwide with an old-world sound that communicates a modern intellect. Praised for his technical precision and virtuosity, he is also lauded for his poetic and imaginative interpretations of standard works as well as rarely heard and newly composed repertoire.

A native of Minsk, Belarus, Yevgeny Kutik immigrated to the United States with his family at the age of five. His 2014 album, Music from the Suitcase: A Collection of Russian Miniatures (Marquis Classics), features music he found in his family’s suitcase after immigrating to the United States from the Soviet Union in 1990, and debuted at No. 5 on the Billboard Classical chart. The album garnered critical acclaim and was featured on NPR’s All Things Considered and in The New York Times. In 2021, Kutik launched Finding Home: Music from the Suitcase in Concert, a five-episode docu-recital series based on the album featuring music performances interwoven with Kutik’s personal narrative storytelling

Kutik’s recent releases on Marquis include The Death of Juliet and Other Tales (2021), which highlights Russia’s rich history of folklore and folktales portrayed in the music of Prokofiev and Meditations on Family (2019), for which he commissioned eight composers to translate a personal family photo into a short musical miniature for violin and various ensemble, envisioning the project as a living archive of new works inspired by memories, home, and belonging. Kutik and Meditations were featured by Strings Magazine as its cover story for the 2019 March/April issue. Kutik’s other recordings include his debut album, Sounds of Defiance (2012), and Words Fail (2016), both released to critical acclaim.

Kutik made his debut with the Detroit Symphony Orchestra led by Leonard Slatkin in 2021, performing the world premiere of Joseph Schwantner’s Violin Concerto, written specifically for Kutik. In 2019, he made his debuts at the Kennedy Center, presented by Washington Performing Arts, and at the Ravinia Festival. Kutik made his major orchestral debut in 2003 with Keith Lockhart and The Boston Pops as the First Prize recipient of the Boston Symphony Orchestra Young Artists Competition. In 2006, he was awarded the Salon de Virtuosi Grant as well as the Tanglewood Music Center Jules Reiner Violin Prize.

Passionate about his heritage and its influence on his artistry, Kutik is an advocate for the Jewish Federations of North America, the organization that assisted his family in coming to the United States, and regularly speaks and performs across the United States to both raise awareness and promote the assistance of refugees from around the world.

Yevgeny Kutik began violin studies with his mother, Alla Zernitskaya, and went on to study with Zinaida Gilels, Shirley Givens, Roman Totenberg, and Donald Weilerstein. He holds a bachelor’s degree from Boston University and a master’s degree from the New England Conservatory and currently resides in Boston. Kutik’s violin was crafted in Italy in 1915 by Stefano Scarampella.

Anna Polonsky is widely in demand as a soloist and chamber musician. She has appeared with the Moscow Virtuosi, the Buffalo Philharmonic, the Saint Paul Chamber Orchestra, the Columbus Symphony Orchestra, the Memphis Symphony, the Chamber Orchestra of Philadelphia, the St. Luke’s Chamber Ensemble, and many others. Ms. Polonsky has collaborated with the Guarneri, Orion, Daedalus, and Shanghai Quartets, and with such musicians as Mitsuko Uchida, Yo-Yo Ma, David Shifrin, Richard Goode, Emanuel Ax, Arnold Steinhardt, Peter Wiley, and Jaime Laredo. She has performed chamber music at festivals such as Marlboro, Chamber Music Northwest, Seattle, Music@Menlo, Cartagena, Bard, and Caramoor, as well as at Bargemusic in New York City. Ms. Polonsky has given concerts in the Amsterdam Concertgebouw, the Vienna Konzerthaus, the Alice Tully Hall, and Carnegie Hall’s Stern, Weill, and Zankel Halls, and has toured extensively throughout the United States, Europe, and Asia. A frequent guest at the Chamber Music Society of Lincoln Center, she was a member of the Chamber Music Society Two during 2002-2004. In 2006 she took a part in the European Broadcasting Union’s project to record and broadcast all of Mozart’s keyboard sonatas, and in the spring of 2007 she performed a solo recital at Carnegie Hall’s Stern Auditorium to inaugurate the Emerson Quartet’s Perspectives Series. She is a recipient of a Borletti-Buitoni Trust Fellowship and the Andrew Wolf Chamber Music Award.

Anna Polonsky  made her solo piano debut at the age of seven at the Special Central Music School in Moscow, Russia. She emigrated to the United States in 1990, and attended high school at the Interlochen Arts Academy in Michigan. She received her Bachelor of Music diploma from The Curtis Institute of Music under the tutelage of the renowned pianist Peter Serkin, and continued her studies with Jerome Lowenthal, earning her Master’s Degree from the Juilliard School. In addition to performing, she serves on the piano faculty of Vassar College, and in the summer at the Marlboro and Kneisel Hall chamber music festivals.

Beginning in 2018, Polonsky performs in a trio with clarinetist David Shifrin and cellist Peter Wiley.

Ms. Polonsky is a Steinway Artist.