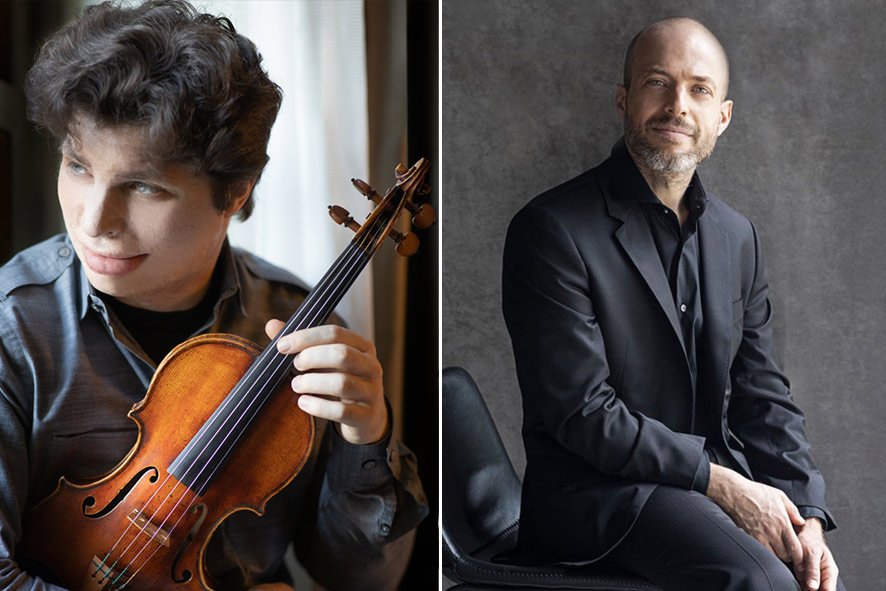 “The essence of Hadelich’s playing is beauty: revealing in the myriad ways of making phrase come alive on the violin, delivering the musical message with no technical impediments whatsoever, and thereby revealing something from a planet beyond ours.” – Washington Post

“Weiss has both powerful technique and exceptional insight, and brought an almost sculptural presence and weight to the music.”
— The Washington Post

Augustin Hadelich is one of the great violinists of our time. Known for his phenomenal technique, insightful and persuasive interpretations and ravishing tone, he tours extensively around the world. He has performed with all the major American orchestras as well as the Berliner Philharmoniker, Concertgebouworkest, Orchestre National de France, London Philharmonic Orchestra, Seoul Philharmonic Orchestra, NHK Symphony Orchestra Tokyo, and many others.

Augustin Hadelich is the winner of a 2016 GRAMMY Award – “Best Classical Instrumental Solo” – for his recording of Dutilleux’s Violin Concerto, L’Arbre des songes, with the Seattle Symphony and Ludovic Morlot (Seattle Symphony MEDIA). A Warner Classics Artist, his most recent release is “Recuerdos”, a Spain-themed album featuring works by Sarasate, Tarrega, Prokofiev and Britten with the WDR Sinfonieorchester Köln and Cristian Măcelaru. Writing about his GRAMMY-nominated 2021 release of Bach’s Sonatas and Partitas, the Süddeutsche Zeitung, one of Germany’s most prestigious newspapers, boldly stated: “Augustin Hadelich is one of the most exciting violinists in the world. This album is a total success.” Other albums for Warner Classics include Paganini’s 24 Caprices (2018); the Brahms and Ligeti violin concertos with the Norwegian Radio Orchestra under Miguel Harth-Bedoya (2019); and the GRAMMY-nominated “Bohemian Tales”, which includes the Dvořák Violin Concerto with the Symphonieorchester des Bayerischen Rundfunks conducted by Jakub Hrůša (2020).

Augustin Hadelich, now an American and German citizen, was born in Italy, to German parents. He studied with Joel Smirnoff at New York’s Juilliard School. Hadelich made a significant career leap in 2006 when he won the International Violin Competition in Indianapolis. Other distinctions include an Avery Fisher Career Grant (2009); a Borletti-Buitoni Trust Fellowship in the UK (2011); an honorary doctorate from the University of Exeter in the UK (2017); and being voted “Instrumentalist of the Year” by the influential magazine “Musical America” (2018).

Augustin Hadelich is on the violin faculty of the Yale School of Music at Yale University. He plays violin from 1744 by Giuseppe Guarneri del Gesù, known as “Leduc, ex Szeryng”, on loan from the Tarisio Trust.

Orion Weiss:  One of the most sought-after soloists and chamber music collaborators of his generation, Orion Weiss is widely regarded as a “brilliant pianist” (The New York Times) with “powerful technique and exceptional insight” (The Washington Post). He has dazzled audiences with his lush sound and performed with dozens of orchestras in North America including the Chicago Symphony, Baltimore Symphony, Boston Symphony, Los Angeles Philharmonic, and New York Philharmonic and at major venues and festivals worldwide.

Weiss has been awarded the Classical Recording Foundation’s Young Artist of the Year, Gilmore Young Artist Award, an Avery Fisher Career Grant, and the Mieczyslaw Munz Scholarship. A native of Ohio, Weiss attended the Cleveland Institute of Music and the Juilliard School, where he studied with Emanuel Ax. Learn more www.orionweiss.com.