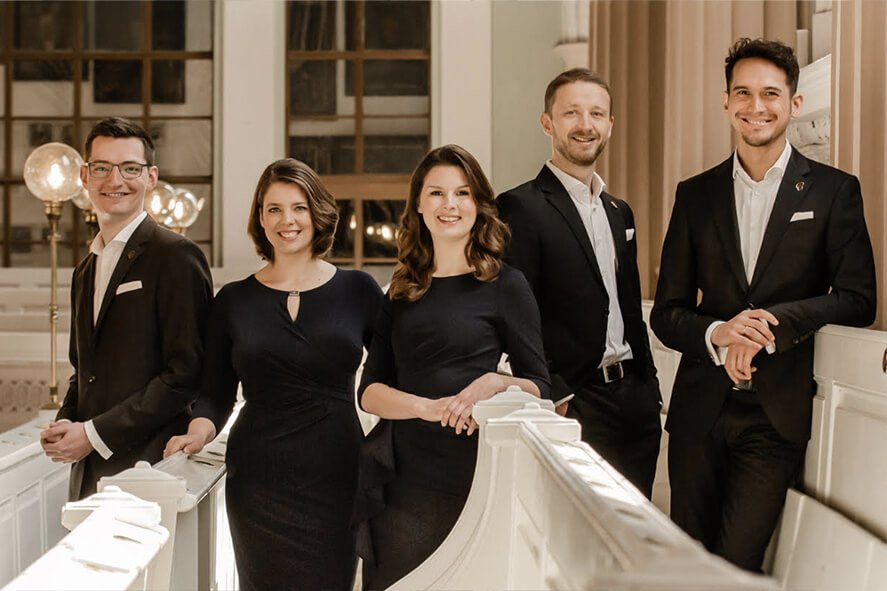 “They infuse their singing with wonderful lyricism and exquisite expressiveness, they bring passion to their interpretations and they, quite simply, bring whatever they sing to glorious life.”
— Deseret Morning News

Sounds of Faith and Madness

Described as “nothing short of remarkable…they, quite simply, bring whatever they sing to glorious life” by Deseret Morning News, Calmus was founded in 1999 in Leipzig, Germany.

A perfect blend of sound, precision, lightness and wit are the hallmarks of Calmus, one of the most successful a cappella quintets in the world. The ensemble has forged a refined sound which few groups have achieved. The wide range of sound colors, the joy in performing that they convey on the concert platform, and their varied and imaginative programs are praised by the press time and time again. These five Leipzig musicians have won a string of international prizes and competitions, including Concert Artists Guild International Competition, the OPUS KLASSIK (Best Choral Performance), the ECHO KLASSIK and the Supersonic Award. The reach of their activities is constantly expanding, taking them throughout Europe as well as to North and South America. Calmus has performed at major series and halls in North America including Carnegie Hall’s Weill Recital Hall, Lincoln Center Great Performers series, Ravinia Festival and Washington Performing Arts, the Virginia Arts Festival and Early Music Now.

Calmus is tireless in their quest to discover new repertoire. Shaped by the centuries-old tradition of great German boys’ choirs, the music of Bach, Mendelssohn and other great German composers who lived and worked in Leipzig, they are naturally at home in the vocal music of the Renaissance, the Baroque and the Romantic. In all their ventures, there are frequently partnering with musicians such as vocal ensemble Amarcord, the Lautten Compagney Berlin, the Raschèr Saxophone Quartet, Hamburger Ratsmusik and the Frankfurt Radio Bigband. As this frequently means learning new contemporary repertoire, over the years Calmus has commissioned numerous new works from composers including Bernd Franke, Steffen Schleiermacher, Wolfram Buchenberg, Mathew Rosenblum, Bill Dobbins, Paul Moravec, Michael Denhoff and Harald Banter, and the group has given many world premieres.

Calmus’ latest project from Spring 2021 is called MOSAIK which contains 41 commissioned miniature vocal works by composers and friends from all over the world as a statement on the time of the COVID-19 pandemic. The result can be heard and seen online at www.calmus-mosaik.de and it’s breathtaking.

Part of Calmus’s is devoted to encouraging the up-and- coming generation, so teaching and workshops are part of their regular schedule, both at home in Leipzig and on their travels.