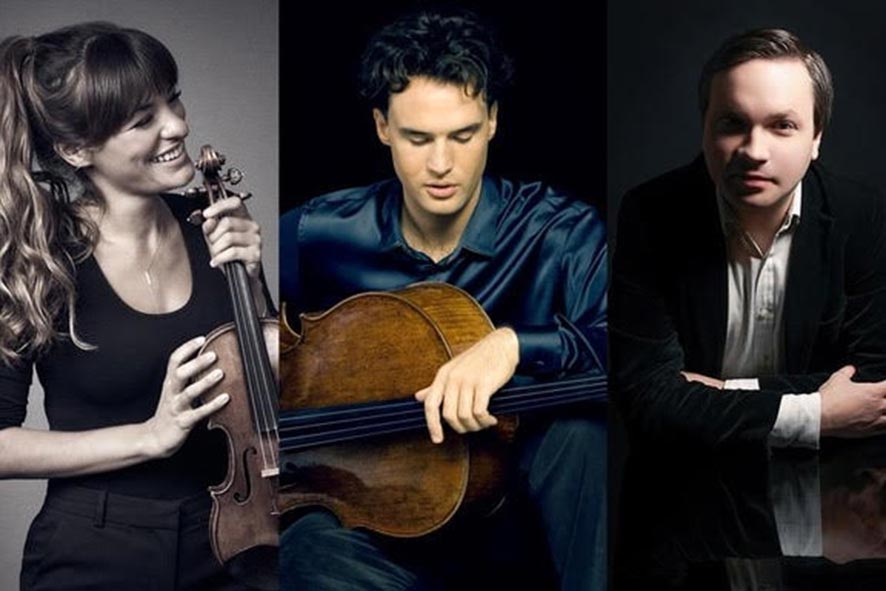 [Benedetti] “This is an artist who exudes star quality; her exquisite playing, combining true virtuosity and a deep musical intelligence made this a memorable performance.”
–Herald Scotland

Nicola Benedetti is one of the most sought-after violinists of her generation. Her ability to captivate audiences with her innate musicianship and spirited presence, coupled with her wide appeal as a high-profile advocate for classical music, has made her one of the most influential classical artists of today.

Born in Scotland of Italian heritage, Nicola began violin lessons at the age of five with Brenda Smith.  In 1997, she entered the Yehudi Menuhin School where she studied with Natasha Boyarskaya.  Upon leaving, she continued her studies with Maciej Rakowski and then Pavel Vernikov.

This season, Nicola will collaborate with the Orchestra of the Age of Enlightenment for live concerts at the BBC Proms, Snape Maltings and Saffron Hall, and with digital projects for the Philharmonia and Paavo Järvi and the Scottish Chamber Orchestra with Maxim Emelyanychev.  In Spring 2021, Nicola will give the world premiere of Mark Simpson’s Violin Concerto with the London Symphony Orchestra and Gianandrea Noseda, before the same work is performed with the RSNO and WDR Köln.  Other season highlights include a recording and performances of Beethoven’s Violin Concerto with Aurora Orchestra.

Last season’s highlights include Nicola’s debut with the Wiener Symphoniker, a tour of Asia with the Deutsches Symphonie-Orchester Berlin and Robin Ticciati, plus returning performances with Vladimir Jurowski and the London Philharmonic Orchestra, Michael Tilson Thomas with both the New World Symphony and the London Symphony orchestras, City of Birmingham Symphony Orchestra, Scottish Chamber Orchestra and a European tour with Thomas Søndergård and the Royal Scottish National Orchestra.

Nicola has continued her role as a dedicated, passionate ambassador and leader in music education. Her commitment to supporting the UK’s music practitioners was underlined in July 2018, when Nicola took over as President of the European String Teachers’ Association.  She has formalised her vision and expanded her commitment to the education of young people and supporting of music teachers by establishing a charitable organisation: The Benedetti Foundation.   Launched in January 2020, The Benedetti Foundation, puts on transformative orchestra-based workshops for young people and teachers, that showcase what music education at its best can look and feel like.  Since its formation, the Foundation has delivered four sessions in the UK, working with children and teachers from 31 out of the 32 local authorities in Scotland, 30 out of London’s 32 boroughs, and in close partnership with many organisations, music services, hubs and private music teachers across the UK.  In May 2020, during lockdown, the Foundation went online with a “virtual sessions” providing over 7,000 musicians of all ages and stages online tutorials and inspirational workshops.  The impact of the sessions has been unprecedented with over 66 countries represented and sign-up from people in 41 of the 50 US States.

Winner of the GRAMMY Award for Best Classical Instrumental Solo in 2020, as well as Best Female Artist at both 2012 and 2013 Classical BRIT Awards, Nicola records exclusively for Decca (Universal Music). Her most recent recording of Elgar’s Violin Concerto entered at number one in the UK’s Official Classical Album Chart and received critical acclaim including a 5* review in The Times: “Yet beyond sheer agility, Benedetti offers listeners something even more valuable: a dynamic personal interpretation, refreshing and convincing.”  Other recent recordings include her GRAMMY award-winning album written especially for her by jazz musician Wynton Marsalis: Violin Concerto in D and Fiddle Dance Suite for Solo Violin. Nicola’s recording catalogue also includes works from Shostakovich & Glazunov Violin Concertos to Szymanowski Concerto (London Symphony Orchestra/Daniel Harding) to Homecoming; A Scottish Fantasy, which made Nicola the first solo British violinist since the 1990s to enter the Top 20 of the Official UK Album Chart.

Nicola was appointed a Commander of the Order of the British Empire (CBE) in the 2019 New Year Honours list, awarded the Queen’s Medal for Music in 2017, the youngest ever recipient, and was appointed as a Member of the Most Excellent Order of the British Empire (MBE) in 2013 in recognition of her international music career and work with musical charities throughout the United Kingdom.  In addition, Nicola has received nine honorary degrees to date.

Described by the New York Times as “a musician of great technical prowess, intellectual curiosity and expressive depth”, cellist Leonard Elschenbroich has performed as a soloist with the world’s leading orchestras.

He gave his Vienna Musikverein debut on a European Tour with the Staatskapelle Dresden, his US debut with the Chicago Symphony Orchestra, his Asian debut at Suntory Hall in Tokyo, and appeared five times at the Royal Albert Hall for the BBC Proms.

A committed performer of contemporary music, Elschenbroich has commissioned several new works from composers including Mark-Anthony Turnage, Luca Lombardi, Arlene Sierra and Suzanne Farrin. He gave the world premiere of Mark Simpson’s first Cello Concerto – written for him – with the BBC Philharmonic Orchestra at Bridgewater Hall, and Brian Elias’ first Cello Concerto at the BBC Proms.

In 2012 he co-founded the Orquesta Filarmonica de Bolivia, the first orchestra to perform a Mahler Symphony in the nation’s history. Elschenbroich returns to Bolivia on a regular basis to lead educational projects and develop the orchestra. This commitment led Elschenbroich to explore the field of conducting with various orchestras across Latin America and the UK. He gave his London conducting debut, leading The Telegraph to write “Elschenbroich gave a performance of Brahms’ 1st Symphony that at times touched the heights.”

Elschenbroich’s first three albums for Onyx Classics focused on 20th century Russian repertoire, from Rachmaninov to Schnittke. 2016 saw the release of “Siécle”, a portrait of a century of French music from Saint-Saëns to Dutilleux, recorded with the BBC Scottish Symphony. They have received 5-star reviews from The Telegraph, The Guardian, The Financial Times, as well as receiving Editor’s Choice in Gramophone. This year, after a decade of worldwide performances together with Alexei Grynyuk, Onyx Classics released their recording of the complete Beethoven Cello Sonatas. The album received wide critical acclaim, including Editor’s Choice in Gramophone, Album of the Month in BBC Music Magazine, and is also available on vinyl.

His many awards include the Leonard Bernstein Award, Förderpreis Deutschlandfunk and Borletti Buitoni Trust Award. In 2012 he was named BBC Radio 3 New Generation Artist, he was Artist-in-Residence of Deutschlandfunk for the 2014-15 season, and Artist-in-Residence at the Philharmonic Society Bremen from 2013-2016.
Born in 1985 in Frankfurt, Elschenbroich received a scholarship, aged ten, to study at the Yehudi Menuhin School in London. He later studied with Frans Helmerson at the Cologne Music Academy.

He plays a cello made by Matteo Goffriller “Ex-Leonard Rose-Ex-Alfredo Piatti’ (Venice, 1693), on private loan.

British-Ukrainian pianist Alexei Grynyuk performs throughout the world appearing in the most prestigious concert halls and music festivals. He has performed recitals at the Verbier Music Festival in Switzerland, Newport Music Festival in USA, “Musical Kremlin” Festival in Moscow, Duszniki Chopin Festival in Poland, International Keyboard Festival in New York among many others. The venues include Wigmore Hall and the South Bank Centre in London, Salle Cortot and Salle Gaveau in Paris, Great Hall of Moscow Conservatoire, Concertgebouw in Amsterdam.

Alexei has displayed tremendous interest in music from early childhood and started performing at the age of six. At thirteen he attracted wide attention by winning First prize at the Dyagilev All-Soviet-Union piano competition. He went on to win many prizes, notably first prizes at the Horowitz International Piano Competition in Kiev, Shanghai International Piano Competition in China.

His musical development was shaped by his studies at the Kiev Conservatoire under Natalia Gridneva and Valery Kozlov. He refined his studies with Hamish Milne at the Royal Academy of Music in London. Later he was awarded Associate of the Royal Academy of Music(ARAM) and served as a jury member at the Benjamin Britten International Violin Competition London and the prestigious “Vendome Prize” International Piano Competition.

Being a passionate chamber musician, Alexei Grynyuk is part of a piano trio with his regular partners violinist Nicola Benedetti and cellist Leonard Elschenbroich. Described by The Telegraph as “A trio of True Stars” together they have toured the world extensively in the past decade performing at the Royal Albert Hall London, Birmingham Symphony Hall, LSO St. Luke’s, Frankfurt Alte Oper, 92Y New York, Gardner Museum Boston as well as