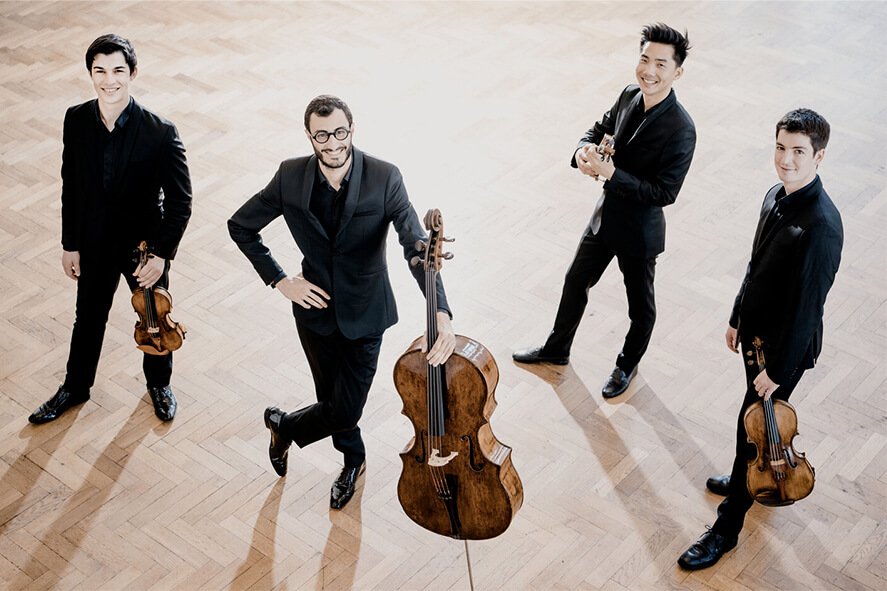 With all four members only in their twenties, the Paris-based Arod Quartet has already dazzled awestruck chamber-music lovers in concerts at such prestigious venues as the Auditorium of the Louvre in Paris and the Verbier Festival in Switzerland. The Arod quickly skyrocketed to international attention when they won the coveted First Prize of the 2016 ARD International Music Competition in Munich, having already taken First Prize at the Carl Nielsen Chamber Music Competition in Copenhagen. In April 2019, the Quartet undertook its American debut tour, which featured its inaugural Carnegie Hall performance–one of the only European chamber ensembles ever to make its Carnegie Hall debut on its first trip to the United States.

Previous seasons have seen the Arod Quartet – which was named the ECHO Rising Star during the 2018-19 season – perform at the Auditorium of the Louvre, the Philharmonie de Paris, London’s Wigmore Hall and Barbican Centre, Salzburg’s Mozarteum, the Konzerthaus in Vienna, Amsterdam’s Concertgebouw, the Tonhalle Zurich, the Gulbenkian Foundation in Lisbon, the Elbphilharmonie in Hamburg, the Oji Hall of Tokyo, and the Berlin Philharmonia.

Their teachers include Mathieu Herzog and Jean Sulem; the group currently serves as the artist-in-residence at the Queen Elisabeth Music Chapel in Brussels with the Artemis Quartet. In recent years the Arod has worked very closely with the Ebène Quartet and the Diotima Quartet, and has collaborated with Alexandre Tharaud, Martin Fröst, and Amihai Grosz, the founding member of the Jerusalem Quartet and now the principal violist of the Berlin Philharmonic. Their sophomore album, a recording of Schoenberg, Zemlinsky, and Webern with the soprano Elsa Dressing, was released in Fall 2019 (Erato Warner Classics).

The group takes its name from Legolas’s horse in J.R.R. Tolkien’s epic Lord of the Rings trilogy; in Tolkien’s mythic Rohirric language, Arod means ‘swift.’ Mécénat Musical Société Générale is the Arod’s principal sponsor, and the ensemble is the 2016 HSBC Laureate of the Académie du Festival d’Aix-en-Provence. Jordan Victoria and Alexandre Vu are loan recipients of composite Stradivari and Guadagnini violins through the Beare’s International Violin Society.