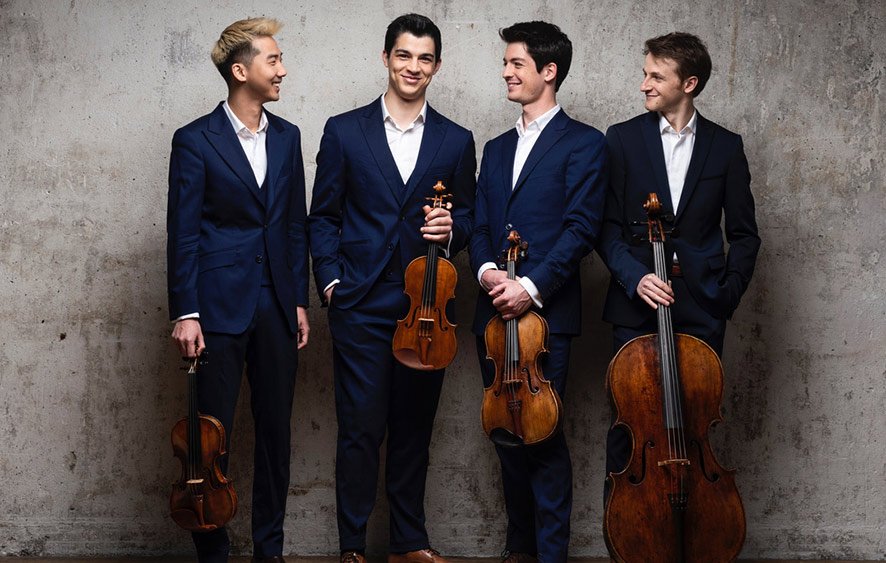 “The classy and cool youth of the Arod String Quartet…their quartet is already a luxury instrument that many composers dream to seize.”
— Le Monde

The Arod Quartet skyrocketed to international attention when they won the coveted First Prize at the 2016 ARD International Music Competition in Munich and went on to serve as a BBC New Generation Artist from 2017-2019. Since then, they have firmly established themselves in performance and on recording at the forefront of the younger generation of string quartets by dazzling audiences around the globe.

An exclusive recording artist for Erato Warner Classics, the Arod has released a trio of highly acclaimed, imaginatively programmed, and immaculately recorded albums since their debut Mendelssohn disc in 2017. Their sophomore release entitled “The Mathilde Album” featured works by three key figures in Vienna’s musical life in the early 20th century – Schoenberg, Zemlinksy, and Webern – and honored Mathilde Zemlinksy (the composer’s sister) who became Schoenberg’s wife and was the dedicatee of his second quartet. Most recently, the Arod released a Schubert album featuring Schubert’s “Death and the Maiden” together with two other works.

Recent and upcoming performances include ones in their hometown at the Philharmonie de Paris, New York’s Carnegie Hall, London’s Wigmore Hall and Barbican Centre, Salzburg’s Mozarteum, the Konzerthaus in Vienna, Amsterdam’s Concertgebouw, the Tonhalle Zurich, the Gulbenkian Foundation in Lisbon, the Elbphilharmonie in Hamburg, the Oji Hall of Tokyo, and the Berlin Philharmonia.

In recent years the Arod has worked very closely with the Ebène Quartet and the Diotima Quartet, and has collaborated with Alexandre Tharaud, Martin Fröst, and Amihai Grosz, the founding member of the Jerusalem Quartet and now the principal violist of the Berlin Philharmonic.

The group takes its name from Legolas’s horse in J.R.R. Tolkien’s epic Lord of the Rings trilogy; in Tolkien’s mythic Rohirric language, Arod means ‘swift.’ Mécénat Musical Société Générale is the Arod’s principal sponsor, and the ensemble is the 2016 HSBC Laureate of the Académie du Festival d’Aix-en-Provence. Jordan Victoria and Alexandre Vu are loan recipients of composite Stradivari and Guadagnini violins through the Beare’s International Violin Society.