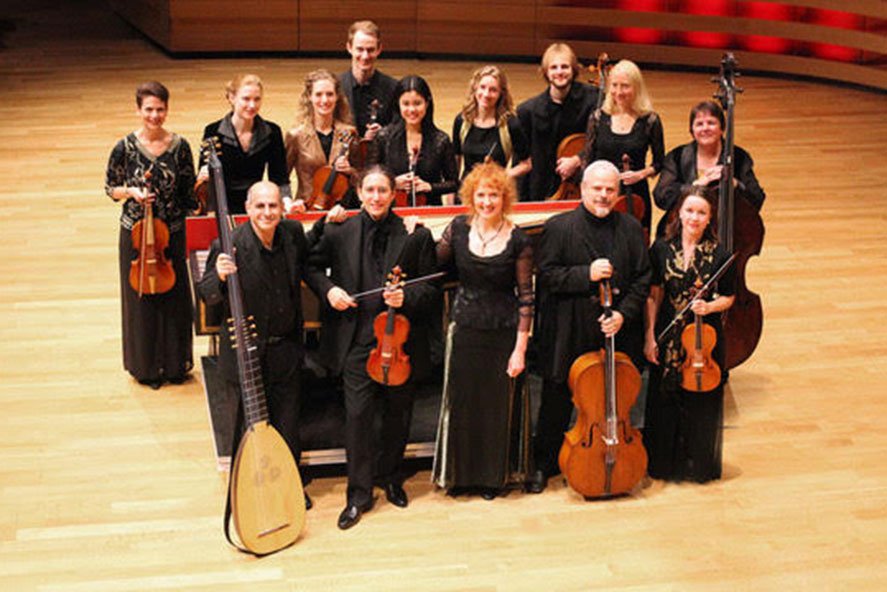 CDs will be sold in the lobby.
Checks, cash & credit cards will be accepted.

Apollo’s Fire
Named for the classical god of music, healing and the sun, Apollo’s Fire is a GRAMMY®-winning ensemble. The period-instrument orchestra was founded by award-winning harpsichordist and conductor Jeannette Sorrell, and is dedicated to the baroque ideal that music should evoke the various Affekts or passions in the listeners. Apollo’s Fire is a collection of creative artists who share Sorrell’s passion for drama and rhetoric.

Hailed as “one of the pre-eminent period-instrument ensembles” (THE INDEPENDENT, London), Apollo’s Fire has performed five European tours, with sold-out concerts at the BBC Proms in London (with live broadcast across Europe), the Aldeburgh Festival (UK), Madrid’s Royal Theatre, Bordeaux’s Grand Théàtre de l’Opéra, and major venues in Lisbon, Metz (France), and Bregenz (Austria); as well as concerts at the Irish National Concert Hall (Dublin), the Irish National Opera House (Wexford), the Birmingham International Series (UK), the Tuscan Landscapes Festival (Italy), and Belfast Castle with a live broadcast carried by the Associated Press of Europe.

AF’s London 2014 concert was praised as “an evening of superlative music-making… the group combines European stylishness with American entrepreneurialism” (THE TELEGRAPH, UK). This concert was chosen by the TELEGRAPH as one of the “Best 5 Classical Concerts of 2014.”

North American tour engagements include sold-out concerts at Carnegie Hall (2018), the Tanglewood Festival (2015 and 2017), the Ravinia Festival (2017 and 2018), the Metropolitan Museum of Art in NY (2013, 2014, and 2015), the Boston Early Music Festival series, and the Library of Congress, as well as concerts at the Aspen Music Festival, Caramoor Festival, and major venues in Toronto, Los Angeles and San Francisco. The ensemble has performed two major U.S. tours of the Monteverdi Vespers (2010 and 2014) and a 9-concert tour of the Brandenburg Concertos in 2013.

At home in Cleveland, Apollo’s Fire frequently enjoys sold-out performances at its subscription series, which has drawn national attention for creative programming. 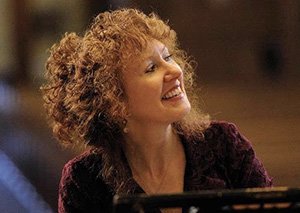 Jeannette Sorrell
GRAMMY®-winning conductor and harpsichordist Jeannette Sorrell is recognized internationally as one of today’s most compelling interpreters of Baroque and Classical repertoire.

She studied conducting under Leonard Bernstein and Roger Norrington at the Tanglewood and Aspen music festivals; and studied harpsichord with Gustav Leonhardt in Amsterdam. She won both First Prize and the Audience Choice Award in the Spivey International Harpsichord Competition, competing against over 70 harpsichordists from Europe, Israel, the U.S., and the Soviet Union.

She is the founder and artistic director of APOLLO’S FIRE, and has led the renowned period ensemble in sold-out concerts at Carnegie Hall, London’s BBC Proms, Madrid’s Royal Theatre, the Tanglewood and Ravinia festivals, Boston’s Early Music Festival, the Library of Congress, and the Metropolitan Museum of Art (New York), among others. She and her ensemble have built one of the largest audiences of any baroque orchestra in North America. Sorrell and Apollo’s Fire have released 26 commercial CDs, including 8 bestsellers on the Billboard classical chart and a 2019 GRAMMY®-winner. Her recordings include the complete Brandenburg Concerti and harpsichord concerti of Bach; Bach’s St John Passion; Handel’s Messiah; and the Monteverdi Vespers, among others.

Sorrell has attracted national attention and awards for her creative programming, which has brought many new listeners to early music through the use of contextual and dramatic elements. She received an honorary doctorate from Case Western University and an award from the American Musicological Society.

A native of Mallorca in the Balearic Islands of Spain, Francisco is making a name for himself as both a performer and a leader of innovative educational institutions. As a soloist, he has performed the Mendelssohn Violin Concerto with the Bayerische Philharmonie led by the late Sir Colin Davis, the Sibelius Concerto with the Münchner Rundfunkorchester, and the Brahms Violin Concerto with Venezuela’s Teresa Carreño Orchestra under the baton of Gustavo Dudamel. His versatility as a performer has brought him to perform with numerous ensembles across the artistic spectrum: from major orchestras such as the City of Birmingham, Vancouver, Pacific and Buffalo Symphony Orchestras, the chamber orchestras of Saint Paul and Philadelphia, to the baroque ensemble Apollo’s Fire and the new music driven Metropolis Ensemble. Francisco has worked under the batons of Hans Graf, Alondra de la Parra, Christoph Poppen, Jeannette Sorrell, and Joshua Weilerstein, among many others.

Highlights of Francisco’s upcoming orchestral engagements include debuts with the Austin, Tallahassee, Tucson Symphonies, as well as the Symphony of the Americas. He will also reappear with Alabama, Balearic Islands and Vancouver Symphony Orchestras and the Chamber Orchestra of Philadelphia. Recent recital debuts included the Phillips Collection and Palm Beach’s Kravis Center as well as recitals debuts at the Mecklenburg-Vorlpolmmern and Geizeitenkonzerte festivals with his duo partner, pianist Matthias Kirchnerheit. In Asia, his two recital tours of eastern China and Japan have been rescheduled for 2022 due to COVID-19 restrictions. Fullana was also recently named Artist-in Residence for the 30th anniversary season of the Grammy-winning baroque ensemble Apollo’s Fire. They will be featured this 21/22 season in venues all around the country, including New York’s Carnegie Hall and Cleveland’s Severance Hall.

In 2018 Orchid Classics released Francisco’s acclaimed debut recording Through the Lens of Time performed with the City of Birmingham Symphony Orchestra under Carlos Izcaray. Fullana’s new double album on Orchid, Bach’s Long Shadow, juxtaposes two of the monumental Bach’s Partitas on gut strings and baroque setup with virtuoso solo violin works from the next 3 centuries. Fullana’s love for the sound of gut strings and baroque music has blossomed into an artistic partnership with the baroque ensemble Apollo’s Fire. The group led by Jeannette Sorrell joins forces with Francisco for their fiery take on Vivaldi’s Four Seasons both on their newest album just released on Avie Records this October.

Active as a chamber musician, Francisco is a performing member of The Bowers Program at the Chamber Music Society of Lincoln Center, and has participated in the Marlboro Music Festival, the Musicians from Marlboro tours, the Perlman Music Program, the Da Camera Society, and the Moab, Music@Menlo, Mainly Mozart, Music in the Vineyards, and Newport music festivals. His musical collaborators have included Viviane Hagner, Nobuko Imai, Mitsuko Uchida, and members of the Guarneri, Juilliard, Takács, and Cleveland quartets. Francisco’s Spanish roots are also often explored in collaboration with Hispanic artists such as guitarist Pablo Sainz-Villegas and bandoneonist JP Jofre. Their recital for The Violin Channel’s Vanguard Concerts at Merkin Hall will be released across all streaming platforms this upcoming fall.

Born into a family of educators, Francisco is a graduate of the Royal Conservatory of Madrid, where he matriculated under the tutelage of Manuel Guillén. He received Bachelor’s and Master’s degrees from The Juilliard School following studies with Donald Weilerstein and Masao Kawasaki, and holds an Artist Diploma from the USC Thornton School of Music, where he worked with the renowned violinist Midori.

Francisco is a committed innovator, leading new institutions of musical education for young people. He is a co-founder of San Antonio’s Classical Music Summer Institute, where he currently serves as Chamber Music Director. He also created the Fortissimo Youth Initiative, a series of music seminars and performances with youth orchestras, which aims to explore and deepen young musicians’ understanding of 18th-century music. The seminars are deeply immersive, thrusting youngsters into the sonic world of a single period while inspiring them to channel their overwhelming energy in the service of vibrant older styles of musical expression. The results can be galvanic, and Francisco continues to build on these educational models.

Francisco Fullana performs on the 1735 “Mary Portman” ex-Kreisler Guarneri del Gesù violin, kindly on loan from Clement and Karen Arrison through the Stradivari Society of Chicago.