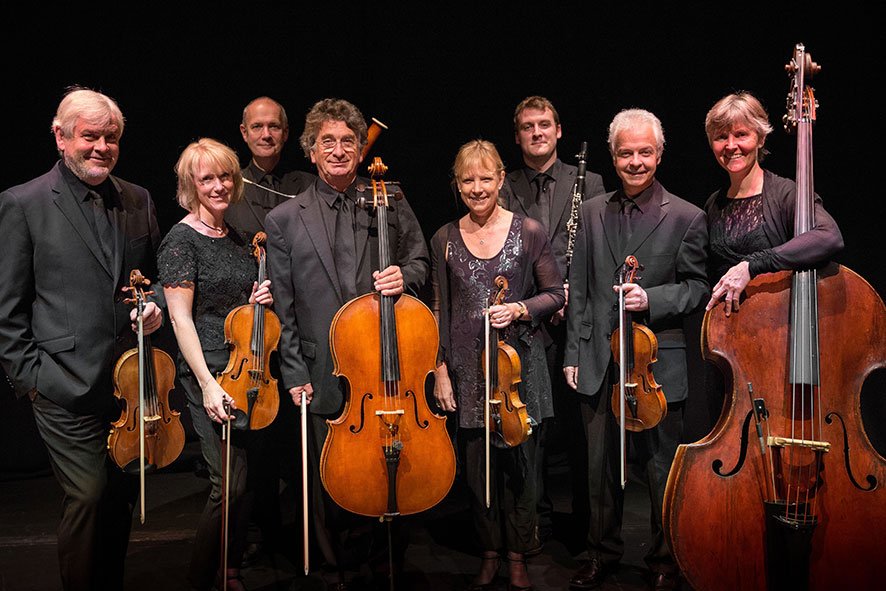 “Impressive sophistication and complexity of phrasing, elegant articulation and an impeccable sense of balance… What sets the Academy apart from other ensembles is its exceptional musical intelligence.”
— Seen and Heard International

Academy of St Martin in the Fields Chamber Ensemble

The Academy Chamber Ensemble was formed in 1967, drawing its membership from the world-renowned chamber orchestra the Academy of St Martin in the Fields, which was itself founded by Sir Neville Marriner in 1958 and is currently led by Music Director Joshua Bell.  The purpose behind the formation of the Chamber Ensemble was to perform the larger scale chamber music repertoire with players who customarily worked together, instead of the usual string quartet with additional guests.  Drawn from the principal players of the orchestra and play-directed by Academy Director / Leader Tomo Keller, the Chamber Ensemble now performs in multiple configurations from wind trios to string octets.  Its touring commitments are extensive and include regular tours of Europe and North America, whilst recording contracts with Philips Classics, Hyperion, and Chandos have led to the release of over thirty CDs.

“impressive sophistication and complexity of phrasing, elegant articulation and an impeccable sense of balance… What sets the Academy apart from other ensembles is its exceptional musical intelligence.”
-Seen and Heard international

Tomo Keller (violin)was born in Stuttgart in 1974 to German-Japanese parents, both of whom were professional pianists.  He started playing the violin at the age of six and at ten years old he gave his first performances as a soloist with an orchestra.  Tomo studied at Vienna’s University for Music and Performing Arts and New York’s Juilliard School.  Numerous prizes and awards followed, and he has since performed at major concert halls all around the world, including as a soloist with the Beethovenhalle Orchestra Bonn, St Petersburg Camerata, London Symphony Orchestra, Radio Symphony Orchestra Berlin and the Vienna Symphony Orchestra.  Tomo Keller is a much sought-after orchestral leader, having led the Essen Philharmonic Orchestra (1999–2007), the London Symphony Orchestra (Assistant Leader 2009-2015), the Swedish Radio Symphony Orchestra (2014-present), and more than 20 orchestras as guest leader.  Tomo was appointed Leader of the Academy of St Martin in the Fields in December 2015.  Tomo plays a violin by Andrea Guarneri, Cremona 1667, made available to him by the Swedish Järnåker Foundation.

Harvey de Souza (violin) has been a member of the Academy since 1993 and has led the orchestra on tours with Sir Neville Marriner and soloists including Joshua Bell and Julia Fischer.  As a member of the Chamber Ensemble he has performed extensively throughout South America, Europe and the USA.  Harvey has been a member of the Chamber Orchestra of Philadelphia, and a member of the Vellinger String Quartet, who were winners of the 1994 London International String Quartet Competition.  He has been Principal Guest Director of the Lancashire Sinfonietta, and is co-artistic director of the Sangat Chamber Music Festival, now in its seventeenth year in Mumbai.  Harvey plays on a Carlo Bergonzi, kindly lent to him by the Beare’s International Violin Society.

Robert Smissen (viola) won a scholarship to Chethams School of Music at the age of 14, and went on to study at the Guildhall School of Music with David Takeno. While there he won prizes for chamber music and solo playing.  After college he was appointed principal viola with the Northern Sinfonia, a post he held until 1986.  He currently plays with the Academy, as well as other London chamber orchestras.

Lynda Houghton (double bass) Lynda Houghton is Principal Double Bass with the Academy of St Martin in the Fields and has been playing with the orchestra for over 25 years.  Having studied at the Royal Academy of Music in London and at the Banff Centre for Fine Arts in Canada, she rapidly established a reputation as a talented exponent of contemporary music.  Invited to play with the London Symphony Orchestra -the first female bassist in that orchestra -Lynda enjoys playing with a number of chamber orchestras, including as Principal Bass in the City of London Sinfonia and Orchestra of St. John’s, and as a guest in many other ensembles including the Nash Ensemble and Fibbonacci.

James Burke (clarinet) leads a busy career as both Principal Clarinet of the Academy of St Martin in the Fields and Co-Principal of the BBC Symphony Orchestra.  When not performing, he teaches as a Clarinet Professor at the Guildhall School of Music and Drama, where he once studied with teachers such as Andrew Webster, Nick Carpenter, Barnaby Robson and Joy Farrall. James continues to play as Guest Principal in other orchestras, including the London Symphony Orchestra, London Philharmonic Orchestra, Philharmonia, City of Birmingham Symphony Orchestra and Royal Northern Sinfonia.  He has also worked with the London Sinfonietta, London Conchord Ensemble, Irish Chamber Orchestra, and the Philharmonia Soloists.  As a soloist, James recently performed the Howard Blake Clarinet Concerto, with Sir Neville Marriner conducting.

Julie Price (bassoon) has held Principal Bassoon positions with the BBC Scottish Symphony Orchestra, the Orchestra of the Royal Opera House, Covent Garden and the Royal Philhamonic Orchestra.  She is now Principal Bassoonist of the English Chamber Orchestra and Co-Principal of the BBC Symphony Orchestra. She studied with Edward Warren and William Waterhouse whilst at Manchester University and the Royal Northern College of Music and later with Roger Birnstingl in Geneva.  She has been a Professor of Bassoon at the Royal College of Music in London for many years and often gives classes there and at other institutions.  Aside her orchestral career she regularly appears as a chamber musician and as a soloist.

Stephen Stirling (horn) is a renowned soloist who has appeared at almost every major British venue and with the Academy of St Martin in the Fields, the Chamber Orchestra of Europe, BBC NOW, BBC SSO, Bournemouth Symphony Orchestra and the Orchestra of St John’s. He has a world-wide reputation as a chamber musician, in constant demand at festivals in the UK and abroad, as well as being a founder member of Endymion, The Fibonacci Sequence, the Audley Trio, Arpège, and the New London Chamber Ensemble. Principal of the Academy of St Martin in the Fields andthe City of London Sinfonia, Guest Principal Horn with the Capella Andrea Barca, Orquestra de Cadaques and Scottish Chamber Orchestra, and a Guest Principal of the Chamber Orchestra of Europe, Stephen is privileged to have worked with many of the world’s finest chamber orchestras. 2023-24. Please destroy all previously dated material.